The greatest environmental change wrought so far by the human species is the change in the electromagnetic environment of the earth. For billions of years the earth’s electromagnetic environment was virtually “silent” in the range of the electromagnetic spectrum below visible light, and light itself was the most abundant source of electromagnetic energy. Now, in just a few decades, with the explosion of wireless signals of radio and TV broadcasts, radar, military applications, microwave towers and cell phones etc., the density of radio waves and microwaves in our environment is many millions of times higher than the natural levels with which all life on earth evolved. We have created and are now living in a blanket of electrosmog (e-smog) never before experienced by living species, without having considered the consequences. What were we thinking?

An Electromagnetic Radiation (EMR) is classified as either ionizing or non-ionizing radiation based on the radiation’s capacity to ionize atoms and interfere with chemical bonds. Very high frequency radiation like X-rays and gamma rays pose these hazards. Extremely Low Frequency (ELF) radiation, and higher frequency Radio Frequency (RF) radiation from laptops for example, are non-ionizing radiations that present their own health dangers to the human body. 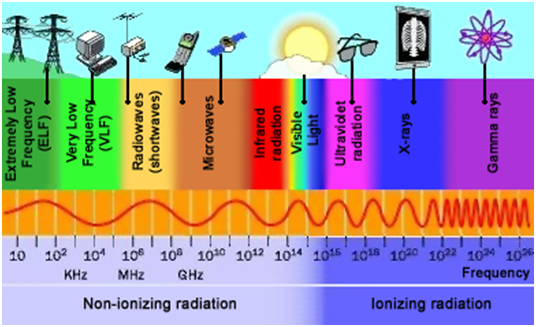 In order to understand why electromagnetic pollution is so hazardous to our health, you must first understand that we are energetic beings who radiate an energy field. In the ancient tradition of Chinese medicine, it is said that we have something called meridians, which are invisible channels of energy that run through our body in an organized and predictable way. Each of these meridians supplies the body with the energy it needs to activate each of our glands and organs. In addition to meridians and acupuncture points, the ancient Sanskrit tradition discusses something called chakras. According to ancient Eastern philosophies, the chakras are electrically charged whirling vortexes that attract specific kinds of energy.  The body is also surrounded by a field of electromagnetic energy that feed the chakras energy. This is often called an aura.

As you can see, in every way, shape and form, from spiritual to physical, we are bioelectrical beings who cannot exist without electrical energy. Each living thing carries its own electrical matrix which interfaces with all other living things. To understand why our biology is negatively impacted by unnatural electromagnetic fields, you must understand the law of resonance, which is a natural law in physics that affects all living things.

It states that when two or more energies are vibrating at differing rates of speed, either the lower frequency will increase, the higher frequency will decrease, or the two will meet in the middle until they are vibrating the same. This natural law effects every area of our lives, from the mundane to the purely spiritual. It operates every second of every day without end. Without exception, it is the most powerful force in the universe.

The Aura around humans is partly composed from EM (electromagnetic) radiation, spanning from microwave, infrared (IR) to UV light. The low frequency microwave and infrared part of the spectrum (body heat) seems to be related to the low levels of the functioning of our body (DNA structure, metabolism, circulation etc.) whereas high frequency (UV part) is more related to our conscious activity such as thinking, creativity, intentions, sense of humor and emotions.

In this day and age we are surrounded by electricity from the cradle to the grave. Wireless digital baby monitors that screen a baby’s movements bathe it in high frequency electromagnetic fields. It’s now a matter of course that kids have their own laptop and mobile phone. As an adult we surround ourselves with all sorts of appliances, from electric and microwave ovens to hairdryers, vacuum cleaners, cordless phones, computers, TVs, WiFi, mobile broadband – the list goes on and on. All of these appliances have the potential to expose you to electromagnetic radiation. Even the wiring in your bedroom might be robbing you of peaceful sleep.

Yes, fatigue and sleep disturbances are a major sign of exposure to electromagnetic fields. This may include you or your children waking up in the middle of the night and having trouble falling asleep again, or on waking up you just don’t feel refreshed. This is why it is important to look at the areas in your home where you spend most of your time – particularly the bedroom. You or your kids might be able to get a decent night’s sleep simply by moving the bed away from major sources of electromagnetic radiation, like a TV, or internet gadgets, laptops etc.

Unfortunately most of our work environments are no better. In fact they might be exposing us to far more EMR than in the home. Many of us work in huge tower blocks that are just riddled with electric and electronic appliances. Sources include the now ubiquitous computer, wireless internet, wiring in walls, fluorescent tubes, hidden substations, photocopiers, air conditioners, even mobile phone transmitters on the roof. In most cases the EMR passes right through walls.

Do we really have to put up with it? In our day and age it is nearly impossible to switch off appliances altogether, even at night. Fridges, digital alarms, TVs on standby all contribute to electrosmog. During the day microwaves, computers, mobile phones, transmission lines, etc., are likely to increase exposure.

What can we do? Nobody is saying you should give up your lifestyle and live in a cave, but there are a few simple guidelines you can follow, such as keeping safe distances from such appliances, that will help to minimise your exposure to potentially harmful electromagnetic radiation. And in case we are not in a position to keep distance, then we need to look at alternatives which help negate the harmful effects of all such appliances.

Most Dangerous Life Companions (MDLC) is what we can term them as. Yes, I am referring to our mobile phones, laptos and TVs. Do a self analysis and you will realize that you are spending maximum part of your daily life with these MDLC. Even when you are sleeping, one of these may be just next to your pillow, that’s the level of their invasion in our lives. 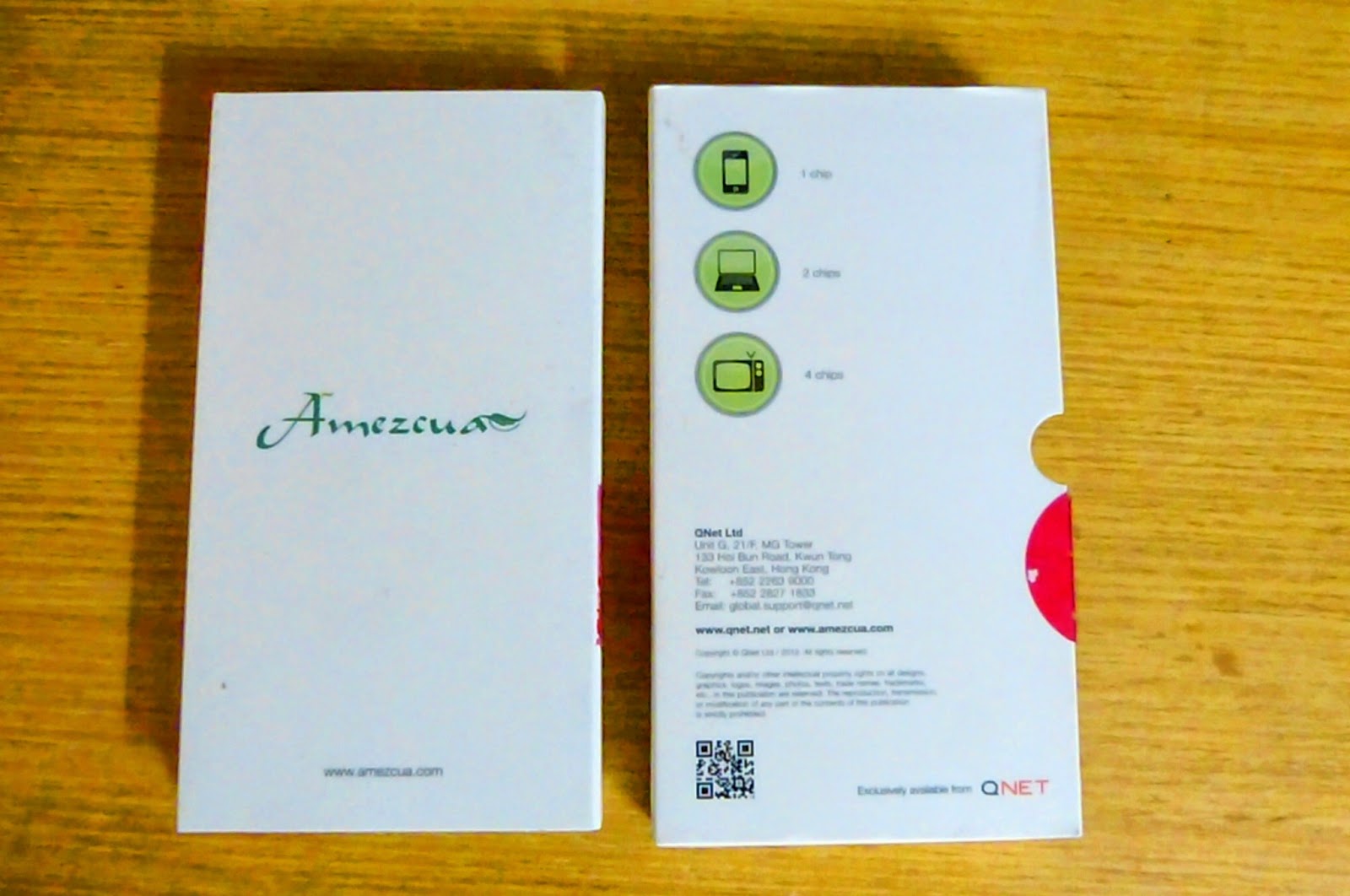 Good News. Realising the inevitability of use of these MDLC by majority of us, Amezcua has come up with a wonderful solution. It is in the form of an Aluminium chip with laser engravings and 25mm in diameter. There are seven Amezcua E-Guards per pack, intended for use at the rate of one for mobile phone, two for laptop, and four for TV, based on the emission level and size of these devices. It can be simply attached to these devices by using the adhesive sticker behind each chip. The best part is that your Amezcua E-Guards go wherever you go by discreetly attaching to your electronic devices.

The key benefits are as under, as confirmed by Dr med Manfred Doepp of the Holistic Centre of Energy Medicine, Germany (Certificate):
This has been made possible by combining two pioneering technologies in one single chip. The Amezcua E-Guard works well with the characteristics of quartz minerals that helps absorb various radiation patterns transforming these into frequencies that are more compatible with biological systems.  An energetic value is additionally integrated into the Amezcua E-Guard to subtly transmit positive information maintaining the well-being of our body.

Protect Yourself. Balance Your Energy. Reduce Your Stress. Amidst the dynamics of the modern world, a healthy body requires a lot of time and attention. Taking reasonable precautions is an important day-to-day thought for us all. The Amezcua E-Guard acts in assistance to those already affected by harmful e-smog as well as providing a preventative measure for vital protection to the body. Combining two pioneering technologies in one single chip, the Amezcua E-Guard works well with the characteristics of quartz minerals that helps absorb various radiation patterns transforming these into frequencies that are more compatible with biological systems.  An energetic value is additionally integrated into the Amezcua E-Guard to subtly transmit positive information maintaining the well-being of our body.

With its easy-to-use design, attaching the Amezcua E-Guard to your everyday electronic devices allows you to take preventative action by engaging, activating and supporting your own body’s natural defenses and energy systems. Your protection goes wherever you go! 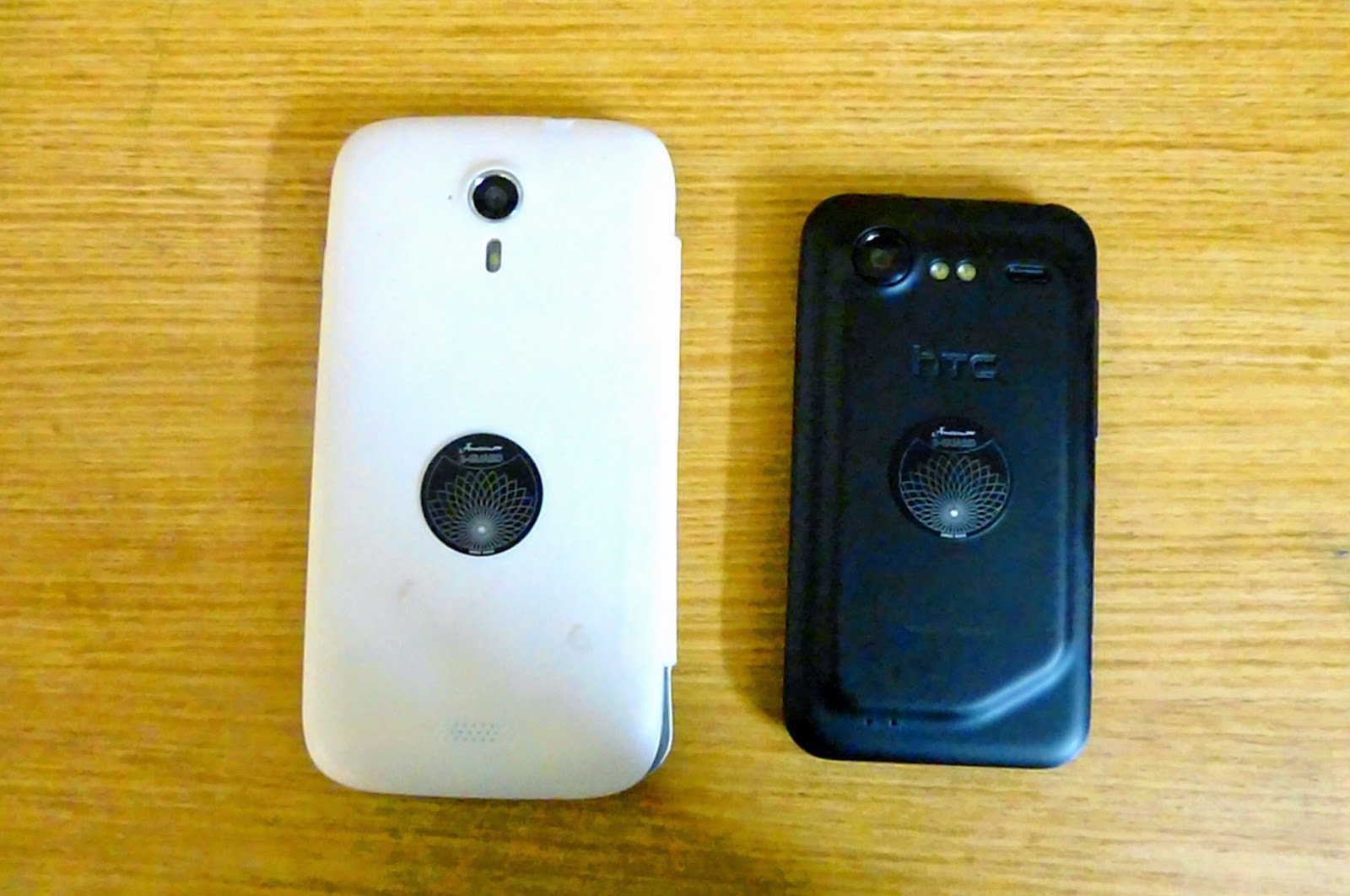 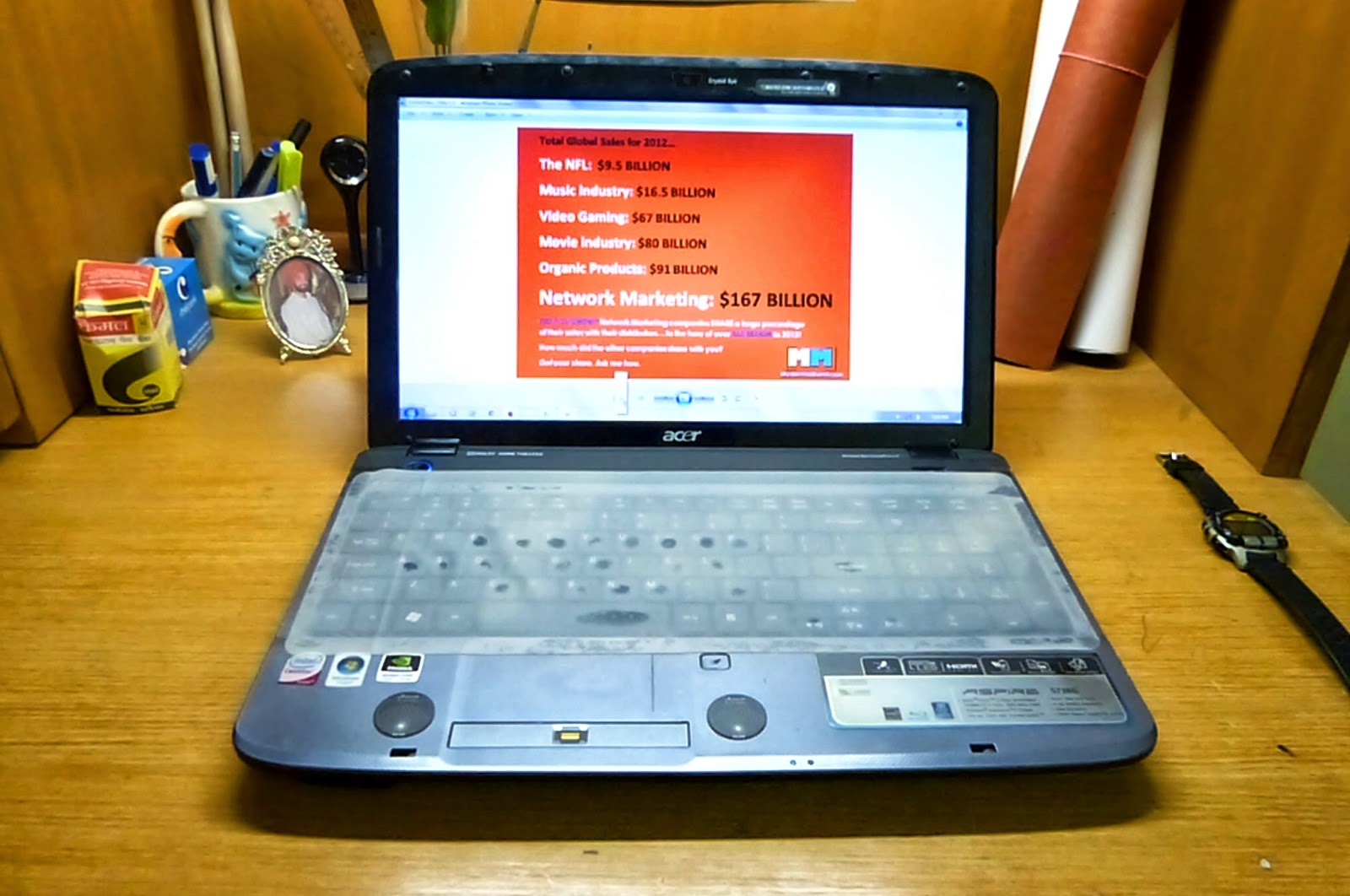 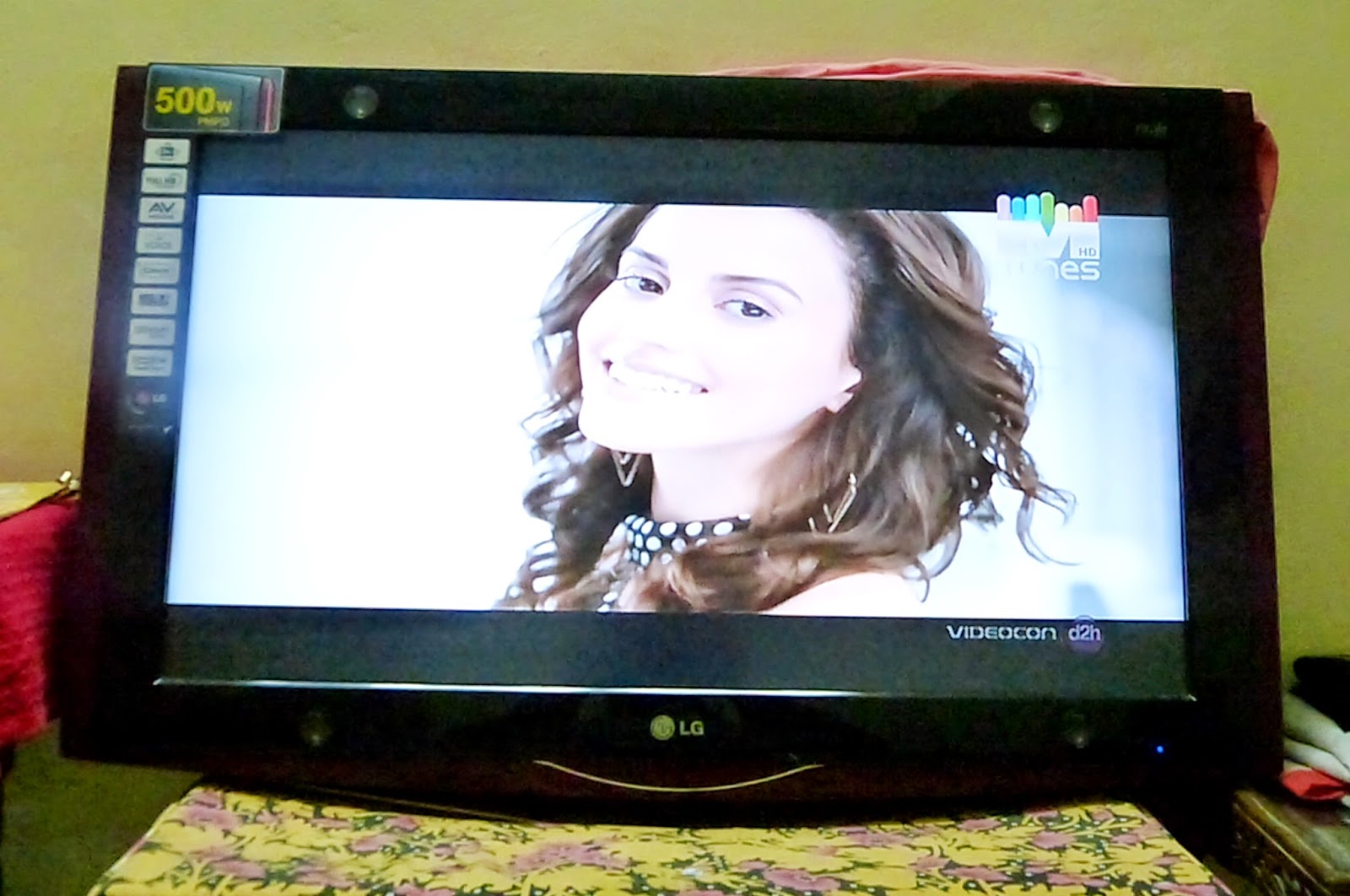 My complete family continues to have a wonderful experience from the day we started using Amezcua E-Guard on our electronic gadgets. There is tremendous increase in our energy levels and rate of fatigue has gone down. We no longer suffer from the constant worry of dangers from e-smog, since we are now in a position to give a tough reply to our MDLCs.

Thanks a ton to Amezcua and QNet. 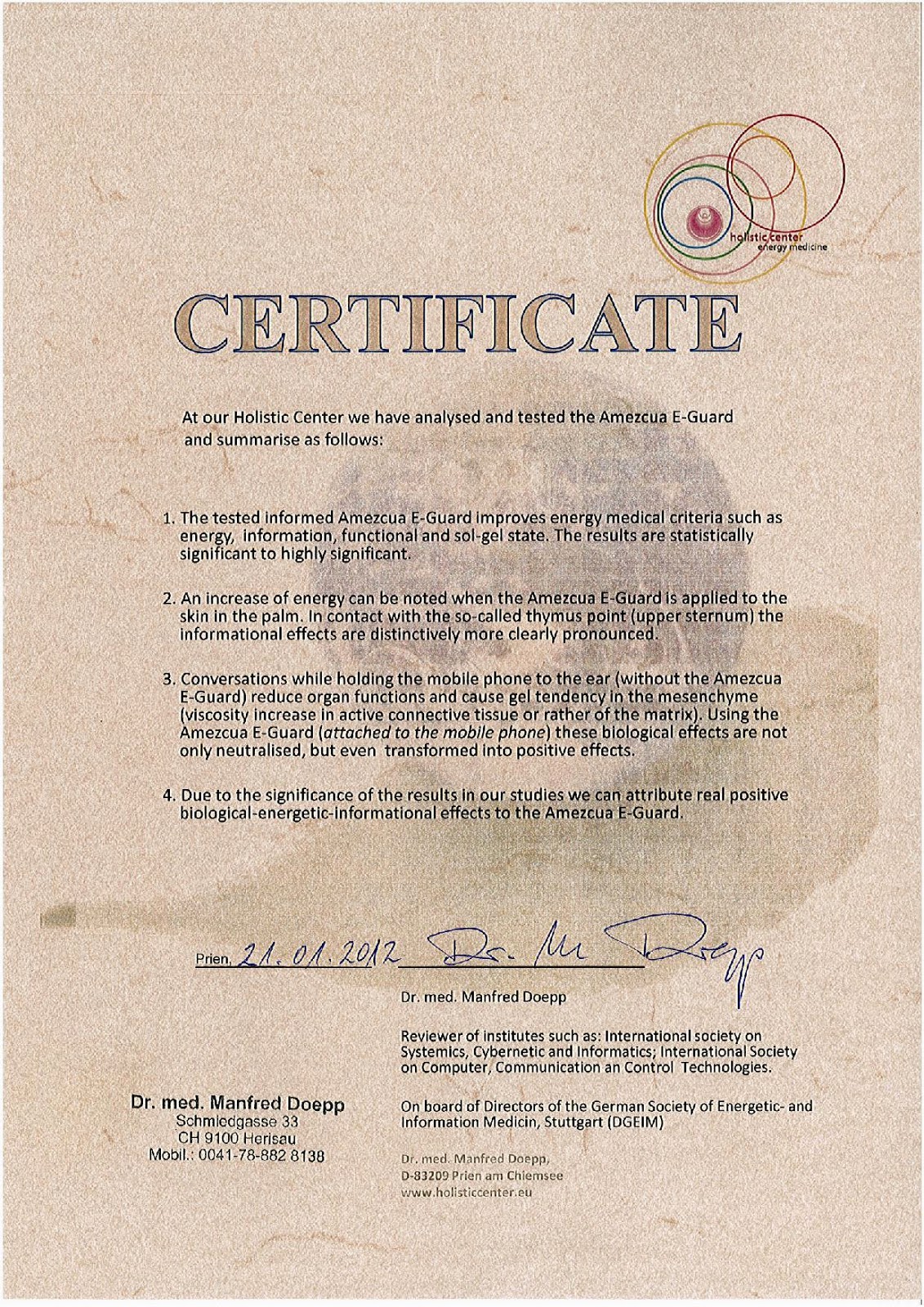 Please refer here for official details of this wonderful product.
Posted by RANVIR at 8:44 PM

RANVIR
I am an Army Officer, who is now re-attired as a Corporate Warrior, and having interest in varied fields from IT to Arts, and Photography to Blogging. I have an inherent inclination for motivation training and personal inspiration. Being an admirer and staunch supporter of human values and humanity, I am always on lookout for means which can help society at large. I am also an extremely passionate Direct Selling Professional and vociferously promote the concept of Time and Financial Freedom. I can be reached by filling the contact form.

In case of any queries or desire to know more, you can email me at ranvirsm@gmail.com

Join Hands With Me

- Learn more about my company which is the best source to achieve Time & Financial Freedom from the official site at www.qnetindia.in or www.qnet.net

- For those who desire to have a regular source of passive income through association with QNET, being an entrepreneur and my business partner, then write to me at ranvirsm@hotmail.com- For those who are hungry for more information, visit my other site, http://bit.ly/17yPR58- For those who really want to be in the fast lane, call me directly on +91-9540-270-444

- My Independent Representative (IR) Number is IN004207, and can be used appropriately.

- Clicking on the posted photos and slides in the blog will zoom them for a better view.- Comments on the blog posts will, both guide and motivate me. So, go ahead without hesitation.- You may also express your 'LIKE' on the Facebook link, and also forward it to your contacts.- In case of a frequent visitor, consider joining the 'Followers' group.

Catch Me On Slideshare